We had a special treat today! We got to visit with the coolest bunch of girls in Salt Lake City, maybe even all of Utah. Our friend Julie took us on a tour of Temple Square and an outdoor mall in Salt Lake City. Her oldest, Anabelle was probably just as good as a tour guide in Temple square and she and Sammy were joined at the hip the whole morning.

It almost seemed like they didn’t move away a year ago. The Morman Temple is beautiful. Actually all the buildings in Temple Square were beautiful. We didn’t actually get to go into the temple, but we saw what it looks like, how it was built and the history behind it. Sam and I got a little better history with Anabelle as our teacher. We also got to go into the tabernacle and another building who’s name escapes me. It had awesome artwork and a really cool room that was painted like the night sky with a statue of Jesus in it. There was a painting of the prophet Samuel when he was a boy and I tried to show Sam and tell him the story about the man he was named after. He just says, “Yeah, I know” and ran off to find Anabelle again. Nice moment, Sam, nice.

In between bridal portraits (no, really, there was a line outside to get married), we managed to sneak a family pic in fronth of the temple. Thanks to the awesome photography skills of Julie and her willingness to lay flat on the ground, we almost got the whole thing! 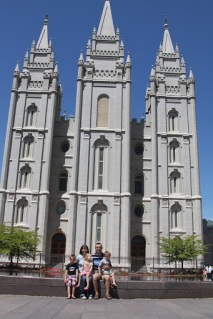 After that, we had lunch and let the kids play at the mall. Then we had to go.

You know, this Air Force life is kinda funny. It’s something I knew for sure would be terrible and aweful. It turns out it is pretty cool. We have met so many new people, people we never would’ve crossed paths with if not for the Air Force. Sure, there will be those you just don’t get along with, but every so often you meet someone extraordinary. Julie is someone who has always inspired me to be a better mom. After almost nine months of being apart from her husband, she still has a peace about her that just amazes me. Now, I know I haven’t seen the days when it’s a knock-down, drag-out fight just to have everyone alive until bedtime, but there is still something about her. So thanks, Jules for the inspiration and the silent reminder to take a step back, take a deep breath, and keep going. 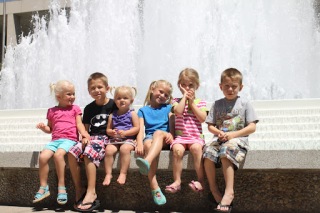 After we left Salt Lake City, we headed northwest to Boise. This drive was supposed to be five and a half hours. Somehow it lasted seven. Oh, that’s right, we came across this on the way. . . 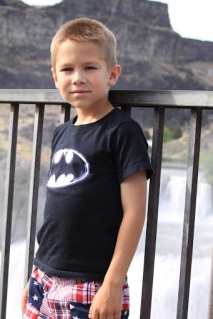 We found a strange, large rodent that we all wanted to pick up and snuggle. No joke, I have about 30 pictures of the little guy, but my computer refuses to upload them. So if you see a random picture of a rodent tomorrow, you’ll know what it’s all about. After googling to find out what it was, we discovered that “most of the mammels in Idaho are rodents.” Chew on that. We never did find out what it was.

Along this joyous road trip, I have been inspired to sing a rendition of  “America, the Beautiful” at least once every day.

We’ve seen almost all the things it talks about:

And we started at one “sea” and tomorrow we will reach the other!

Usually I sing in my best opera voice. Grace screams “Mommy, stop singing!!!” the whole time and Sammy just says, “I love that song”. Ben is usually in the throes of the 3Ds, so it all goes over his head.