Happy Father’s Day! We started today off by serving Wes a very special Hampton Inn breakfast. English muffin and cranberry juice. Ben has a big plan to really celebrate once we settle down in Alaska, but I can’t talk about it here.

We left at a decent hour for our 8 and a half hour drive to what we thought was Seattle. Now here’s what I don’t understand. I relinquished the wheel at Salt Lake City because the mountainous highways aren’t really my thing. The next day I drove a little and as soon as I took over we hit major hills. I’m not even kidding. When Wes drives, flat straight roads. When I drive, steep hills, hairpin turns. Obnoxious. I’m over it. 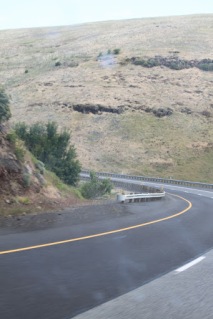 Can you see the drop off? This was a grade that had warning signs and 4 runaway truck ramps! And people were zooming past me! When we got to the bottom of it, I managed to peel myself off the steering wheel and we grabbed lunch. Not surprisingly, the kids didn’t eat anything. Whatevs.

Wes took over and we crossed into Washington and more hills, specifically the Cascade Mountains.

These mountains were gorgeous! Grace got a little scared because, as you can see, it was very cloudy and a little rainy, but I thought it just added to the mystery of them. The way the clouds hung below the mountaintops, it looked like you could reach up and grab a handful of them. The trees are almost overwhelmingly green, just about every shade of green you can think of. Wes swears he saw a wolf. I told him this isn’t Twilight.
We got out of the mountains and reached Seattle, where we thought our hotel was. Turns out its in Bremerton, which turns out to be across Puget Sound. Yeah, you have to take a ferry across or go all the way south to Tacoma and up past the topless coffee shops, which is what we did. But not before driving through Seattle Mariners Traffic.
﻿
﻿
After driving an hour out of the way, we finally made it to our hotel, which turned out to be right on the water, with some pretty nice views. After getting over that frustration, we walked to a pizza place that we thought (because of my awesome navigation skills) was close by. Um, no. We walked a little less then a mile through some unseemly part of town (there were bullet holes and bars) to a pizza place we couldn’t even eat at (THAT was not my fault. Their website said “Dine-in”) just to turn around with our pizza and walk back. My gluten free pizza was probably the best I’ve had yet, though so that makes it a little better. And, hey! The kids each ate two slices!﻿