We have only spent New Years as a singular family one other time in our marriage. We have had the privilege of living near our families for our entire lives up until two and a half years ago when Wes joined the Air Force and tore us from all we hold dear. Just kidding, we’ve loved every minute.
But our first New Years was in Florida and we tried to be all fancy and go out for a kids’ beach ball drop in Panama City Beach. It ended up being way colder then we expected (we’d only been in FL for a week) and really crowded so we left 10 minutes before the ball drop.

This year we decided to play it cool and stay in. I made a make-shift backdrop out of curtains and Christmas lights and the kids and I made some photo booth props. That was hard. I had all these awesome, “pinteresty” ideas in my head, but in reality I was working with a bunch of amateurs. I had to let some control go that day. 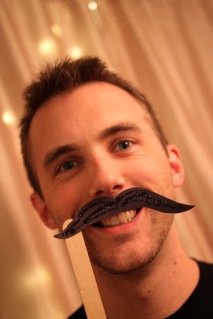 We bought the kids some sparkling grape juice and let them drink out of the “fancy” glasses. I think that was their favorite part of the night! 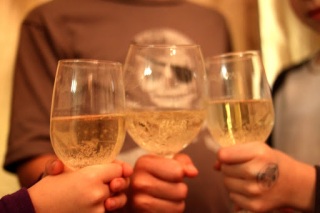 I couldn’t get Rosie to use a prop, but I guess she doesn’t need them with her giant ears. . . 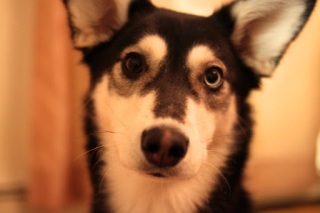 My other Pinterest idea was a balloon drop at 8 o’clock. Hey, it was midnight in New York and that’s all that matters, right? Wes needs to practice his balloon dropping skills. . . 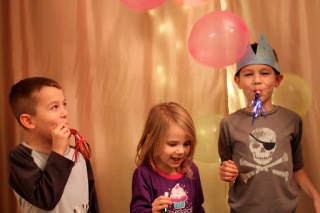 All in all, it was a great night! Much warmer then hanging out waiting for fireworks. Maybe next year, we’ll have other people over for our PJ party!