Day 1. Well, actually, it was Day 11 if you count the week and a half stay in OKC, but I’m not. So Day 1.
I feel like I should warn you that for the next 11 to 12 days you should get used to pictures taken through car windows.
After a lot of worry and frustration (on my part) we finally got all our stuff in and on top of the van. 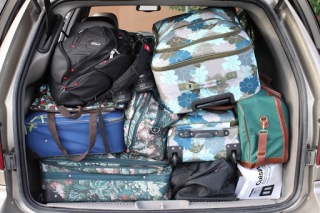 I felt panicked to get out of there. I secretly feared Wes would get a call right before we took off saying he had to stay or, worse, changing our orders. Honestly I still feel like it’s going to happen. I just don’t feel like we are really going to live in Alaska! But we did get out. And we made it here. . . 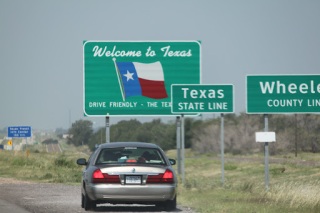 Not gonna lie, Texas is my least favorite state. Ever. Probably because it looks like this. . .

I know there are cool parts of Texas, but I just don’t like it, okay? After lunch in Amarillo we kept on trekking to. . .

That’s New Mexico if you can’t see it. And most of New Mexico looks like Texas with a faint outline of mountains or large hills in the background.

We made it all the way to Albuquerque and only stopped two times! I love Albuquerque. I could even see myself living there, except for the name. Even when I type it out I have to sound out “Al-boo-kwear- kay”. But it was pretty cool.

We had dinner on a whim (thank you Urbanspoon) at a cool Latin fusion place called Pacion Latin Fusion. If you ever find yourself in Albuquerque go there. Best. Tacos. Ever. Wes had cactus. It was really good, too. But not as good as mine.

A little walk around downtown, a little pool time and day one is done. 538 miles down!